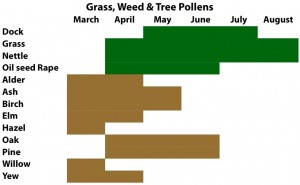 For more information about Hay Fever download the leaflet on Homeopathy & Hay Fever – or go to the Downloads section for other leaflets.